Major meth bust on I-24 over the Rutherford County Line

On Tuesday afternoon, (November 7th, 2017) Shannon D. Baxter age 34 of Indianapolis IN was the driver of a vehicle stopped for a traffic violation on Interstate 24 at exit 114 by Tennessee Highway Patrolman Donnie Clark. According to the arrest warrant, upon making contact with the driver of the vehicle, both the driver and the passenger were very nervous.

Warrants showed that Baxter and passenger Chanel L. Satter age 28, also of Indianapolis IN had conflicting stories concerning where they were going and where they had been. The trooper asked if they had anything in the vehicle and Baxter and Satter apparently told the trooper no. 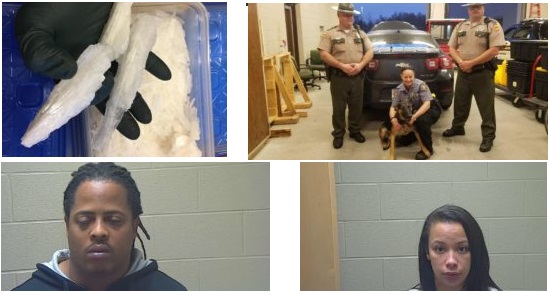 TrooperClark asked for consent to search the car and was denied. Coffee County Sheriff’s Department Deputy Jennifer Curbow and K-9 Max were called to the scene and the dog alerted that there were drugs inside the vehicle. A search of the vehicle yielded approximately 11 pounds of methamphetamine.

Based on methamphetamine being sold per gram, the street value is approximately $500,000. Baxter and Satter were both charged with manufacturing/delivering/selling/possession of a controlled substance. Bonds were set at $500,000 each and they are set to appear in court Jan. 23, 2018.